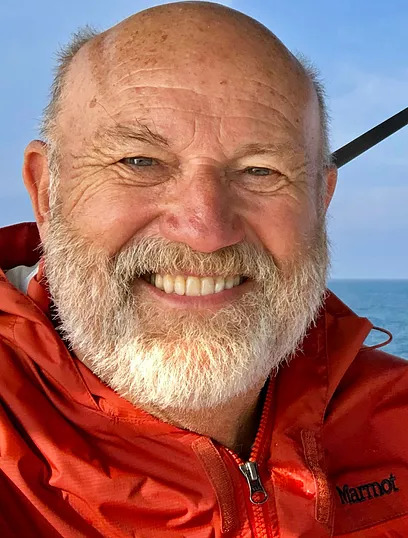 “It is good to have an end to journey toward; but it is the journey that matters, in the end.” – Ernest Hemingway

Paul has been sailing since 1979.  He owned a series of larger sailboats in the states and then owned a Moorings/Beneteau 432 charter boat based in Tortola British Virgin Islands for 8 years in the 1990’s. He traded time on it for similar boats at many other Moorings bases sailing including St. Martin, St. Barts, Anguilla, Guadeloupe, St. Lucia, St. Kitts, Nevis, Grenada, Carriacou, Le Saintes, Marie Galante, Martinique, and the Greek Islands .

In 1999-2000 he spent a year living aboard Halimeda, an Island Packet 45, with his family sailing from Florida’s west coast to Trinidad and Tobago off the north coast of South America visiting most of the islands in between.
​
After the trip, Paul bought Ad Astra, an Island Packet 37 and coastal cruised along Florida’s East, West, and Panhandle coasts.  Eventually sailing to Galveston, Clear Lake, Corpus Christi, and Port Aransas Texas.

After he met Judy, they bought Gratitude, an Island Packet 445. Together they sailed it from Florida to Georgia, North and South Carolina and back for several years. In 2013 they lived aboard for 6 months sailing from Tampa Bay to Ft. Myers, Key West, Marathon, and Ft. Lauderdale.

They now own Sailfish, a Leopard 40 foot sailing catamaran and would love to take you, your family, and or friends for day sails, sunset sails and longer cruises.