To reach a port we must sail, sometimes with the wind, and sometimes against it. But we must not drift or lie at anchor.
Oliver Wendell Holmes, Sr.

Sailfish, our 40’ Leopard catamaran, needed a bottom job. That entails sand blasting off all remaining bottom paint, applying epoxy barrier coats, and then anti-fouling paint to prevent growth of various critters like barnacles, and other tiny sea creatures that love to attach to hard objects underwater. Since Sailfish is 20 feet wide and the widest travel lift I found in Stuart was 19 ½ feet wide, I decided to sail the boat to Ft. Pierce to a yard there with the ability to haul the boat out of the water. I did admit to Judy that I didn’t check on the Hinckley boat yard in Stuart but since their boats are very high end, I assumed they would charge me a lot more to do the job that the Whiticar yard some 25 miles away by water. And it would give me a chance go sailing. I sometimes take as much pleasure in planning a trip as the actual voyage. My preference is always to go “outside”, out in the open ocean, rather than the protected waters of the Intracoastal Waterway. I love the freedom of the sea, the relaxing way I can let the autopilot steer and not worry about running aground, the feeling of actually going to sea. However, one must consider the weather. The forecast was for 25 plus knots of wind out of the east, not a problem, and for 5 to 8-foot seas, something that can be a problem. I was used to sailing our old heavy Island Packets in rough weather as they are designed to take it. Since I am just learning to handle a cruising catamaran, and I had an untested crew, I decided it would be better to go up inside. One more factor is the inlet or passage between the river in this case, and the open sea. The St. Lucie inlet in a notoriously dangerous passage made even worse by high winds and waves opposing the current. For all those reasons, I chose the ICW. I had and appointment at 2:00 PM to have the boat hauled. The trip was a little over 25 nautical miles and I usually figure about 5 mph. That turned out to be what we averaged. We met at the dock in the early predawn light at 7:00 and readied the boat for departure. We pulled out of the slip about 7:15. The first 6 miles were up wind and up current, so we barely made 3-4 knots using the motors. After we finally turned north the east wind was on the beam. We really took off making 7 and an occasional 8 knots. The ICW runs almost straight north up the Indian River behind Hutchinson Island. The land would block the waves but not much of the wind. Sailboats usually sail fastest and easiest on a beam reach with the wind coming from the side. I read that one should reef or reduce the amount of sail more in cats than mono-hulls since they can’t heel and spill the wind. Sailfish has two reefs in the main sail, so we put in the second, reducing the sail area by more than a third. The head sail has a foam luff making it’s shape better when only partially rolled out, so I chose to only put out a little over half of it. The boat and I were happy with my choice. The ICW is straight but somewhat narrow in places so I didn’t trust my crew to steer the boat. I figured if anyone should loose concentration and run aground, it should be me. Fortunately, I didn’t do either. We turned the corner about 9:00 and pulled into the marina dock shortly after noon. It was a beautiful day and the strong breeze off the ocean made the warm temperature pleasant. All aboard agreed the trip good and the vessel sound. 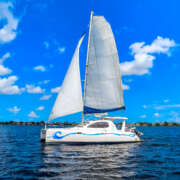